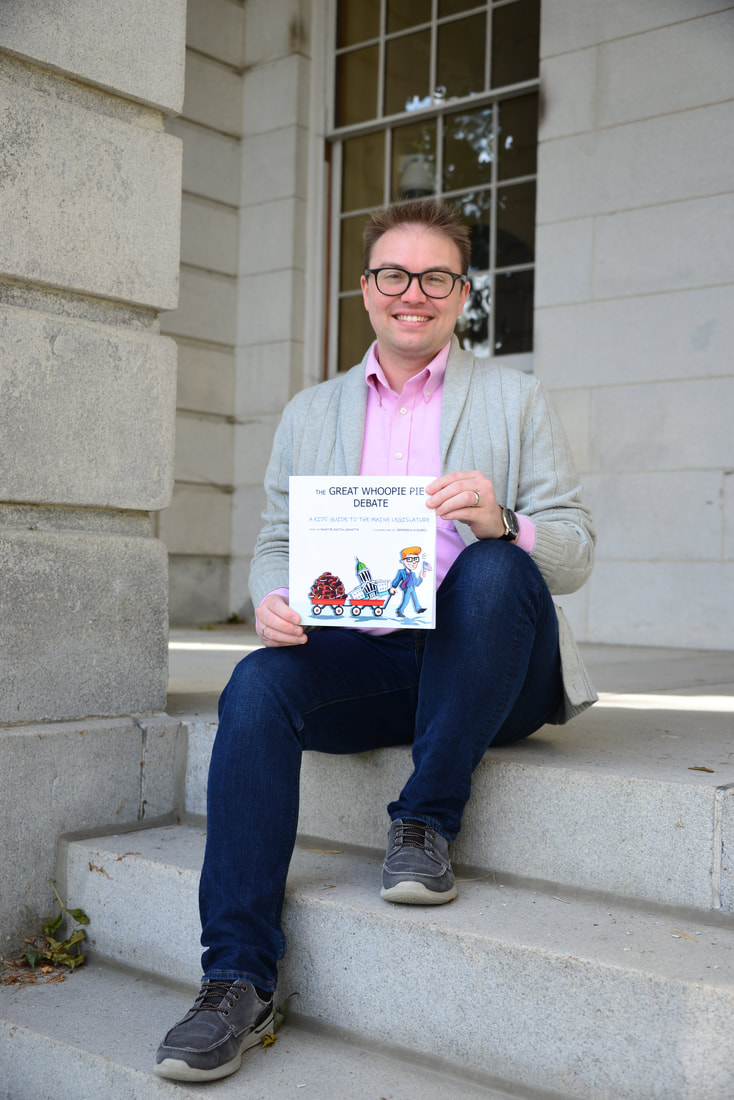 ​Justin Chenette is serving his 4th term in the Maine legislature with two terms in the Senate and two terms in the House of Representatives. He represents Saco, Old Orchard Beach, Hollis, Limington, and part of Buxton in the Senate. He is currently the Chair of the bipartisan Government Oversight Committee, Chair of the Marijuana Advisory Commission, Co-Chair of the Democracy Reform Caucus, and is a member of the Environment & Natural Resources Committee, Senate Ethics Committee, and the Maine Climate Council's Coastal & Marine Working Group. Justin also serves as a Citizen Trade Policy Commissioner.

Justin is the founder of the Maine Democracy Project which works to empower a new generation of voters, advocates, and leaders through civics education, voter registration, and electoral engagement efforts. He is also the author of a children’s book and coloring book entitled The Great Whoopie Pie Debate, aimed at educating students about how their own government works.

In 2012, Justin made history by becoming the nation’s youngest openly gay legislator and Maine's youngest lawmaker at age 21. He was sworn into office just a week before graduating from college. Justin has been recognized nationally by The Advocate magazine, listing him on their list of the 40 Under 40 most accomplished leaders throughout the country, as well as being awarded a full ride fellowship from the Victory Institute to attend the Senior Executives in State & Local Government program at Harvard University’s Kennedy School of Government. He has previously served on various policy committees including Criminal Justice & Public Safety, Taxation, State & Local Government, and was co-chair of the youth caucus.

​Justin’s political career began at age 17 when Governor John Baldacci appointed him to serve on the Maine State Board of Education, making history as its first student board member. He spent the following summers interning at Saco City Hall and Equality Maine improving communications. While in college, he was chosen to be a delegate to the 2012 Democratic National Convention and was a congressional intern for Republican U.S. Senator Olympia Snowe. He re-established the statewide organization, Maine Young Democrats, serving as its president for two years and is a past state director of the Young Elected Officials Network.

Justin founded a non-profit organization to advance arts education, connect Veterans to job training, help students afford college, and increase volunteerism, investing nearly $10,000 into the community. He continues this work through his family's nonprofit scholarship fund. Justin is the past president and current vice president of his community’s downtown revitalization organization, Saco Main Street, is an avid volunteer through the Saco Bay Rotary, and is a member of the Buxton-Hollis Historical Society.
​
Two sitting U.S. Presidents have honored his community work as the recipient of the gold level Volunteer Service Award; in 2008, by President Bush, and in 2016, by President Obama.

​Prior to legislative service, Justin got his start in journalism having been a TV anchor, producer, reporter, and columnist for various media outlets including WPXT, WPME, FOX 23, KATV, CTN, Biddeford Access, Caledonian-Record, Journal Tribune, Portland Daily Sun, and the Vermont Center for Community Journalism. He is best known in Saco for his role managing TATV Channel 3 and hosting his own statewide public affairs show while in high school. He also served on the Society of Professional Journalists National Diversity Committee. He is currently a columnist at the weekly Biddeford Saco OOB Courier.

After attending Saco public schools, he graduated high school from Thornton Academy while taking a full semester of college courses at the University of Southern Maine. Justin graduated from Northern Vermont University-Lyndon with a B.S. in Broadcast News, where he was named the Outstanding Young Alumni in 2019. Justin also earned an Executive Certificate in Public Leadership from the Harvard Kennedy School of Government.​ He is currently pursuing a post-baccalaureate degree in Public Administration from the University of Maine at Augusta.

​He currently works as a licensed Realtor at the Bean Group, as president of his digital marketing firm, Chenette Media, and is the owner of Maine Property Lovers LLC, a real estate investment & property management company. He previously worked as Saco Sport & Fitness's Marketing Coordinator and the Journal Tribune's Digital Advertising Executive.
​
​​​Justin lives in Saco with his husband Eduard, who works as an environmental engineer, an Adjunct Professor of Physics for the University of New England, and serves as a Saco River Corridor Commissioner.
Learn more